I remember the day I found Norma. I felt around a few times and was thinking “what the fuck is this?!” It was in the fall of 2016 and I can’t even remember why I felt my right breast at that moment but you talk about a moment of panic.

I then ignored it for a bit. Thinking it was just a fluke of some kind but occasionally feeling a sharp pain randomly almost like an alarm clock saying “hey…..hunter….go to the doctor.” Finally in March of 2017 when I had my yearly I mentioned it to my doctor. He told me to lower my caffeine intake and that it could be like a cyst or something and that “some women just have lumpy breasts” and also said that sometimes they move around or get bigger and then go back down.

Well….I lowered my caffeine and checked it EVERY DAY. No change. Not even a little. It did not move around. It was stuck in the same spot inside my boob like some chained prisoner. April I went back and spoke about my concerns and he brushed it off again and said that we just switched up my birth control from hormones to no hormones (ladies…I know IUD’s are scary but switching to the non-hormonal IUD was the best choice I’ve ever made! Anyways..) At this point I was becoming very angry and scared. I asked my family if we had any people in our family who had breast cancer. Nope. So then I was looking up the odds I had it. In May, I went to my family doctor who I’ve had since I was like 12. Explained what was going on and had him feel what I was referring to. The look of slight anger on my doctor’s face when I told him how my “lady doc” had responded to me when I told him was priceless. He immediately said he was scheduling a mammogram or at least an ultrasound.

The earliest appointment was June.

June 20th, I met my “boob mate” Norma. Have you ever seen Bates Motel? You know the mom…Norma? That sneaky bitch? Yeah that’s where Norma got her name from.

During the visit and after two doctors looked at this mass in my boob they asked to do a biopsy. I remember just sitting on that doctor’s bed thing and calling my at the time boss and telling her that my quick doctor visit on my lunch break was going longer than I expected and then just breaking down crying. She asked if I was okay and asked if I wanted anyone to come be with me and I just said no. She gave me the rest of the off because I was about to be poked with a big ass needle and probably wasn’t going to be feeling so hot after.

If you’ve never had a biopsy done this is how it goes. They numb up the area (or at least for me they did) and then they take this big ass needle thing that looks like it has a trigger on the other side and some how it takes parts of whatever they are needing to biopsy. You know those heavy duty staplers? Think of that sound. You feel pressure and hear it but I couldn’t feel anything. I couldn’t watch them do it but I watched through the ultrasound. After they’re done taking some samples they leave like a clip (I don’t know the technical term sorry haha) so that if you ever have an X-ray or ultra sound etc they will be able to see that you’ve had a biopsy before.

On my Instagram I used to record myself doing “car chats” and I filmed this..posted it…and then took it down because I was terrified. I’m more open now about it but at the time I was freaking out.

The next 48 hours were hell. My boob looked like I had been brutally attacked or had some flesh eating disease (deep purple and green bruises) and when I finally got the call they said it was a fibroadenoma. Basically a non cancerous tumor that happens in younger women. They told me I would be fine but if at any point it caused me discomfort to get it removed given it’s size. They said that it may become an issue when I decided to have children because of breast feeding etc etc but I had to come back every 6 months for follow up appointments.

Cool right? Just what every 23 year old wants to hear.

Fast forward to December. Norma was a bitch. I would randomly have these shooting pains that the only thing that would help would be to just hold it. Legit hold my fucking boob until the pain passed. I got my letter around Christmas reminding me that I needed to go for my follow up appointment. Let me also add…I noticed Norma grew. Hence why I was having more pain because she was on the move. I still refused to go to the doctor. I was in denial and just felt that I was better not knowing.

My bosses said otherwise. They talked me into going and finally in February I went and had a follow up appointment.

I was right she had grown. She had gone from about 1 1/2 inches to almost 2 inches long. They said that fibroadenomas didn’t always grow that fast and were concerned it was a phyllodes tumor which in fact some CAN be cancerous. They then recommended instead of waiting to go ahead and meet with a breast surgeon.

After my appointment I posted this photo on my feed. In case you don’t feel like clicking that link it was: 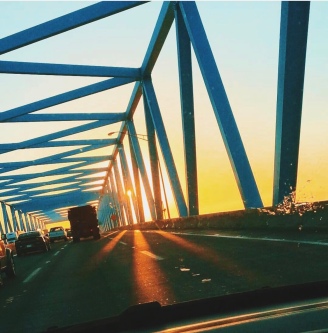 “There’s days that I wish I would have just stayed in bed and ignored the reality of things. Then another part of me knows that’s not the answer and that you have to stay positive and strong. Even when you’re needing to cry in the parking lot of a hospital. Norma (my breast tumor), has gotten bigger. I had my follow up check in on it and got the lovely update. The doctor thinks it may be a different type of tumor but without another biopsy we won’t know for certain. Basically, they’re saying it needs to come out sooner than later just in case. As I sit in my car typing this I know many don’t care to know my business. Which is totally fine. This is more for me. To look back on a year and beyond from now and remember how small I feel but how I also know that I have to be bigger than this whatever it is and I can’t let it get the best of me. The sun rose as I went over the bridge this morning as pictured above and it should be a sign that things are going to be okay. ❤️ Right now however I just want a stiff drink and it’s not even noon….” 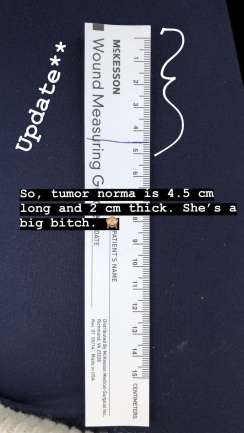 I was so angry. So so angry. I sat in my car for over 30 minutes just crying. I don’t have the exact measurements from that day but I remember seeing Norma on the ultrasound and seeing how even the shape had changed. A couple weeks later I met with my surgeon and when she measured it again…it grew more. By the end of it or at least the last time they measured it and told me the measurements Norma was about 1.7 inches long and 0.78 inches wide and about the same thick. She was like a mini brick just chilling in my boob causing me pain.

March 27th 2018, Norma was evicted. The last thing I remember was them putting something in my IV and then two seconds later it seemed I was out cold. I woke up facing a wall in post-op and starting to freak out. I had no idea where I was, I was in pain and just alone. The nurse came over and the first fucking question I asked was “Where is Norma?” She had no fucking idea what this drugged up girl was talking about. But I repeated myself and then also said “I want to take her home I made her” hahaha I didn’t get to see her. I did look up youtube videos prior to my surgery though so I have a good idea as to how she looked. 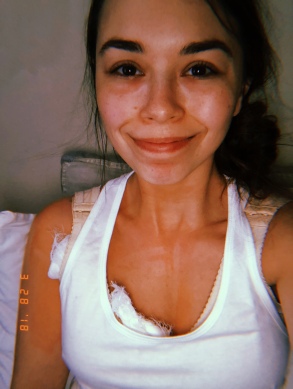 The following couple weeks and month’s were a..struggle. I couldn’t find the videos of before surgery but I was very angry for a while there. Here I was 23 and having body altering surgery and as a young woman…as vain as it sounds I was pissed that I wasn’t going to look like myself anymore. There is a size difference now. I have a scar going right over my boob and some clothes or bathing suits don’t fit the same way they used to. Bras?! Forget about it. I’m never going to find a comfy bra ever. One side will always be either too tight or too loose. Small problems to have but ya know…

I remember a couple days after my surgery crying to my at the time boyfriend about how disgusting I looked. My entire boob and I mean ENTIRE BOOB was bruised and parts were shades of green. I kept calling it Frankenboob. 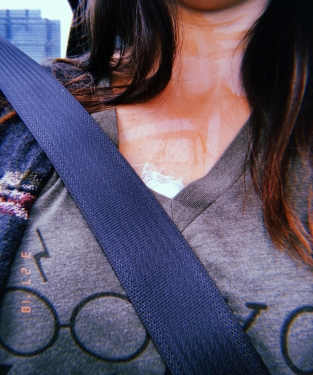 Everything came back good though I’m happy to report. I just had a angry fibroadenoma that liked to grow and cause me pain. It’s been a little over a year now since the surgery and I’ll still have some discomfort. Which is normal. My nerves are still adjusting apparently. I also…which I don’t know if this was intentional but, part of my boob is basically numb. I can feel things but it doesn’t feel the same I guess is the best way to put it.

I decided to write about this because you never know. You don’t. Many girls and guys my age don’t think to check into these things. What if it would have been cancer? What if I would have just ignored it. What if what if what if.

If any one has further questions of any kind or has also experienced something similar feel free to reach out. I had a lot of questions when I first started learning about Norma and believe you me I was terrified.

If you made it this far wonderful, if not then that’s fine too. 🙂